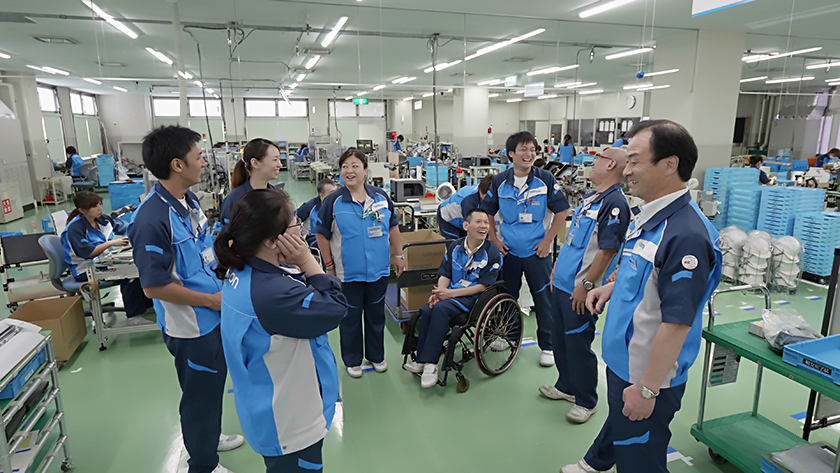 OMRON has long been involved in the employment of personnel with disabilities. One of our initiatives has been the OMRON Taiyo. What distinguishes OMRON Kyoto Taiyo is not simply its role in social contribution but its full-on business goals of being profitable.

With the help of mechanical devices that make up for limitations placed on workers due to a disability, we are able to actualize a work environment where anyone can be themselves, show their capabilities, utilize their individual strengths and engage fully in the manufacturing process.

What's Needed for Independence is Jobs Not Money

It began in 1971. Wanting to offer stable employment to those with disabilities, with the aim of promoting independence, an orthopedic surgeon named Dr. Yutaka Nakamura started a social welfare corporation called "Japan Sun Industries"(Taiyo no Ie) and got in touch with OMRON. Japan Sun Industries championed the slogan "No charity but a chance" and looked for companies that would sympathize with their message. From the outset Japan Sun Industries sought after jobs and not the monetary assistance typified in the form of donations.

In the midst of numerous discouraging responses from companies the founder of OMRON, Kazuma Tateishi, stepped up to the challenge; and in the following year, 1972, the joint venture that is OMRON Taiyo was formed. It was the world's first ever endeavor of its kind.

In 1959 OMRON had already instituted the slogan "To improve lives and contribute to a better society" in to corporate mission. Rooted in that line was the idea of public good with a world leading, pioneering spirit. So with that in mind OMRON Kyoto Taiyo was founded near OMRON headquarters in 1985. Operations began the following year and OMRON Kyoto Taiyo became just one embodiment of its corporate ideal.

OMRON Kyoto Taiyo with over 30 years of history

What OMRON Kyoto Taiyo aims to be is a model of how people with disabilities can work in the same way as able-bodied people. At present, with the inclusion of those with severe disabilities, there are 139 employees with disabilities in manufacturing stations that suit their personalities. And the growth of each individual is highly valued.

First, a precise grasp of each individual's talents and appropriate job capabilities is attained and the work is allocated accordingly. On top of that ongoing training and support is carried out so that people who are "not capable of doing it now" can become people who "can do it" and even take on jobs a rank higher.

Progressiveness doesn't only mean aiming to raise the skill levels of personnel but it also means improving the devices that support their work. Reflecting voices on the floor 380 different tools and semi-automatic devices were developed and installed by FY 2017.

With the idea of "wanting to do work that helps people," Kumi Banda of the Tech Group in OMRON Kyoto Taiyo's Quality Environment and Technology Division, joined the company and is currently involved in making those devices that serve the needs of the company's personnel. "Making tools is a mutual process with the user. First I listen to the user then make a prototype. Then we talk over the prototype and improvements are made upon improvements. Both the maker and the user uphold a mutual level of trust and work as one."

Banda in the process of manufacturing a user-supporting device

For example, it happens that in the packaging of products it becomes necessary to move from A to B in order to get the necessary materials. That becomes a complicated task for someone in a wheelchair. The action of lifting their bodies out of their wheelchairs to retrieve an item itself is an accident waiting to happen.

For that reason devices that automatically send needed materials right to the palm of the hand were installed. It's a set up in which workers are not adjusting to things like an indiscriminate work line and machines but where devices that take into account things like individual personalities and abilities are used to help bring out features people have.

For those with a disability, the help of machines creates an environment that's easy to work in a reality

Just as Ms. Banda said, all of these were workplace innovations that originated from the voices on site, got polished and found a place in the system. From small improvements to big ones, even now ideas from workers who have overcome a variety of handicaps are being picked up and implemented.

There is even a case in which the entire workflow was changed. In the past the saying was "After 20 pieces are made pass them all together to the next guy" but they run into a wall when each worker completed their task at different speeds. Time waiting is time lost. Moreover, even if a defect occurred in a prior step in the process the next worker in the flow was unable to immediately point it out.

For that reason a "one-piece-at-a-time" system was adopted. By changing it so that once a worker is finished their part they pass the piece on to the next worker, the manufacturing burden is balanced across the work line. So when an irregularity appears it was made easier to catch.

Susumu Kangawa who started working at the company thinking "If it's in the same ring, I'm not going to lose to an able-bodied person when it comes to skill."

"I'm in charge of quality control so I check the quality of our products. We properly ship out products that make our customers happy. That's my team's job. That's why our greatest pleasure is when a customer is happy. It's a workplace where we workers have disabilities but, including the feeling of wanting to make strides in manufacturing, there is no difference between us and other factories in general regarding the goals we're aiming for. That's because no matter how comfortable our workplace is, if the product workmanship is bad, it's all over" (Kangawa).

A Case-model Attracting Roughly 5,000 Visitors From Around the World in a Single Year

OMRON has extended its efforts to employ disabled workers to other countries as well, including China, Indonesia, Malaysia and Italy. In 2017 observers coming to OMRON Kyoto Taiyo were counted at 4,838 people and included not only domestic visitors but, starting with North American and European visitors, also included a great many people from regions of Asia, the Middle East, South America and Africa.

Close attention from those in education related fields is also prominent. One such person is Kohei Komamura who does research in social policy theory at Keio University. Since 2016 he has brought students to the factory for observations. Says Komamura, "Among specialty subsidiaries* there are some that say 'they [the disabled] should just do whatever they can do the whole time'. But OMRON Kyoto Taiyo draws out the best from their employees and raises production standards. They're demonstrating that high value added products can be made".

Professor Kohei Komamura of the Faculty of Economics, Keio University

There's a preconceived notion that says "It's hard to raise the skills of the handicapped"; and there is also probably the resignation on the part of the disabled person who says "I have a disability so I can't contribute to society".

"Disabled people are not people we have to feel sorry for and protect. With a little ingenuity they can advance just like able-bodied workers, enjoy the feeling of growth and cooperate in the raising of productivity. They are a necessary part of society's workforce. There is a lack of labor in Japan now. OMRON Kyoto Taiyo has proven to me that the idea that contributions can't be made to society solely because of a disability is absurd. That's how I want students to feel about the hiring of disabled people and in turn take the initiative in promoting this notion." (Komamura)

Our record of achievements changes what is thought about disabled employment. And the challenges that OMRON Kyoto Taiyo takes on continue.

* A subsidiary company that makes special arrangements to plan and facilitate the employment of disabled employees for business owners.

Inspired with the motto "No charity, but a chance!", OMRON, has been continuously working towards creating & strengthening a more diverse & inclusive workforce. The organization operates two p...

Creating the Future of Diversity & Inclusion

"To improve lives and contribute to a better society." These are the words of founder, Kazuma Tateishi in 1959, as codified in OMRON Corporate Motto. Since then, the company has been engaged in busine...